The White Pass Scenic Byway from Mossyrock to White Pass is like pretty beads on a necklace. It’s a necklace Lewis County should be proud to wear. If you’ve never explored this gem, you’ll want plenty of time to enjoy the sparkle of this region.

Despite at-times weak-economy, locals who live in the region are blessed. Many have grown up with fishing poles in their hands or behind the wheel of a logging truck driven by silent, strong fathers or learned the art of quilt-making handed down by grandmothers and great-grandmothers. The quickened, skittering pace of the digital age has not drowned out the voices of the past and in some measure can help open the pages of this thick tome called Lewis County. The names of the campgrounds and rivers may be unpronounceable to those who first visit; many are derived from the Upper Cowlitz (Taidnapam) Indians. Modern Man has had its hand in the region as well – given there are dams including Mossyrock Dam, the tallest dam in the state and Lewis and Clark State Park one of the oldest state parks in Washington. 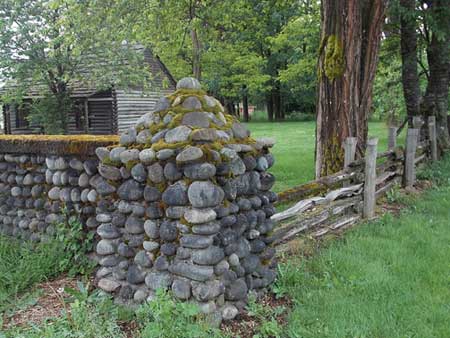 Our first stop was Mary’s Corner which is considered the “beginning” of the White Pass Scenic Byway. It is a small community named for Mary Rogers who ran a store there in the 1920s. There we stopped at Jackson House where a picturesque homestead marks the site of a home built in 1844 by John R. Jackson. It became a stopping place for pioneers as they traveled the Oregon Trail. Governor Stevens and his family spent a night there in 1854 en route to Olympia. The home is nestled in just about the greenest spot one can imagine with dew-sparkled grass and mossy markers with plaques telling the story. 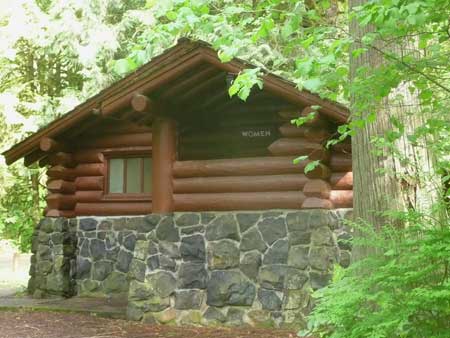 We also stopped at spacious Lewis and Clark State Park, just opening for the season with campsites and facilities built by the Civilian Conservation Corps (CCC) then stopped at nearby Matilda M. Jackson State Park with a short walking trail.

Our next stop was the Cowlitz Salmon Hatchery operated by Tacoma Public Utilities; we found the Visitor Center closed though we could view the fish ladder, Mayfield Dam and Mayfield Lake. The hatchery is just a short drive from US 12 (follow signs for the hatchery from Mary’s Corner on US 12, turn right on Fuller Road). You can also visit the nearby Cowlitz Trout Hatchery – both hatcheries are a part of the Cowlitz River Project. The Cowlitz River Project is operated in cooperation with Tacoma Power, the US Army Corps of Engineers and other government agencies to provide power to Tacoma public utilities, restore fish habitat and provide for water-related recreation.

Our next stop was Mayfield Lake Park. This is a large, attractive park and very popular with locals as well as visitors from outside the area. The well-maintained park is managed by Tacoma Power and offers camping, a boat launch, swimming area, a kids playground and picnicking.

This was also our first visit to Mossyrock, a small town on the eastern edge of Klickitat Prairie (home to the Upper Cowlitz or Taidnapam Native Americans). Mossyrock is considered the gateway to Eastern Lewis County. We didn’t find a lot of moss in Mossyrock but there were several points of interest including The Viking Café Drive-in which is adorned with two demolition derby cars guaranteed to catch the eye of anyone passing by. The Mossyrock Community Center was designated with artistic signs as was the Mossyrock Police Department. We also stopped in at an antique store chockfull of interesting items – the interior is much larger than it appears from viewing outside. We lucked out and purchased a pamphlet about Mount Rainier National Park illustrated with Bob and Ira Spring photographs, old enough not to be dated – 10 cents. 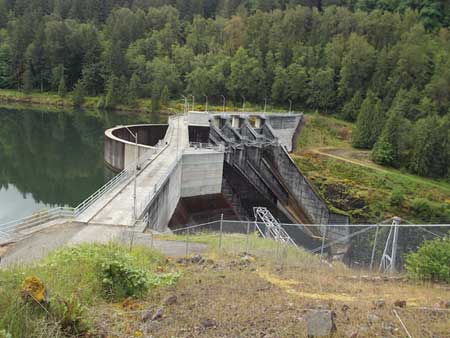 Our next stop was the Mossyrock Dam Viewpoint on Hydrovista Lane (well-signed from US 12) where we pondered a memorial plaque for workers who had lost their lives in the construction of the dam. Mossyrock is our state’s highest dam, rising 606 feet from the bedrock base to its top. Nearby is the South Shore Access day-use area just off US 12. There we watched locals fish and explored a short path along the shores of Riffe Lake which formed behind the dam. We also stopped at the North Shore Fishing Area and read another memorial plaque for workers who perished while building the Mossyrock Dam in 1966-1967.

The next point of interest was the Eastern Lewis County Riffe Lake Overlook with an expansive view to where the waters of the dam covered the abandoned settlements of Kosmos and Riffe. 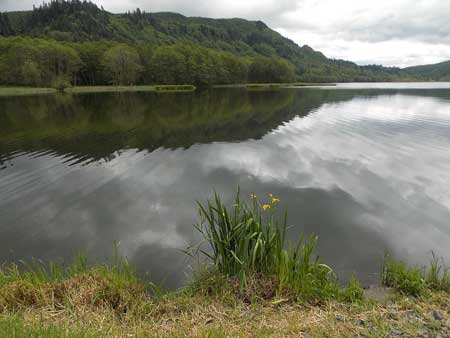 We’d read about Swofford Pond (follow the signs from US 12) and as ponds go, this is one of the prettiest we’ve seen – in late
Swofford Pond May the pond was bordered with yellow water-iris and reeds. Swofford Pond is popular for good reason; the fishing is good, there’s also a boat launch and two nature trails. We parked at the boat launch to hike the nature trail that borders the pond but didn’t get far as part of the trail was still under water.

Instead we hiked the other nature trail, Swofford Flats (Cowlitz Wildlife Area). The trail is short and scenic, providing another boat launch and/or fishermen who fish from shore. We stopped at another pullout near the pond where we met a family who’d come from Sisters, Oregon to fish. Swofford Pond is family-friendly but make sure you follow the Washington Department of Fish and Wildlife fishing regulations (see additional information). You’ll also need to display your Discover Pass to park at the boat launch. Swofford Pond is a popular birding site, not only migratory birds but year-round residents, bald eagles and American kestrels. 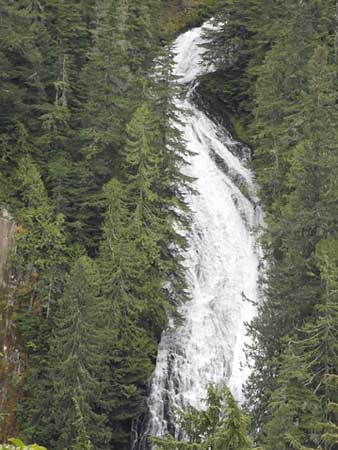 We continued toward White Pass in search of the elusive viewpoint of Lava Creek Falls (it is not signed). To find it, drive about five miles east from the junction of US 12 and Highway 123 and look for a pull-out on the right-hand side of US 12. If you get to the Mount Rainier viewpoint you’ve gone too far.

There is a good view of the waterfall from the pullout but getting to the waterfall is another story. We’d checked out other websites to see if there was a way to get down to the Clear Fork of the Cowlitz River for a better view (there isn’t), not unless you can handle cross-country travel and can ford the river. The Clear Creek Fork of the Cowlitz River is not taken lightly by anyone; even Class 5+ white-river kayakers will need all their skills and a bit of luck to avoid the dangers. The few that have run it consider the price of admission high; the put-in is designated as “The Entrance Exam”.

We continued to Knuppenburg Lake (look for a signed parking area on the right-hand side of the road) where a short path leads to the lake. Here the Clear Fork of the Cowlitz River is crossed on a log with a hand-line though it appears the bridge is not quite finished. Instead of crossing there we walked to the upper end of the lake where others had parked along the highway where another short path leads to the lake. At the lake a cheerful young man was just reeling in a trout and had just reached his limit.

From White Pass we continued east about three miles to the Dog Lake Campground and day-use area operated by Okanogan-Wenatchee National Forest. One person had established camp and was out on the lake fishing. Dog Lake is situated below Spiral Butte; a very scenic setting.