Situated along the busy US Highway 12, White Pass Scenic Byway in Randle near milepost 116, you will find one of the area’s hidden gems. Since 1973, the local community members of the Illahee Garden Club have been maintaining a small, but significant roadside attraction. Funding from a grant helped revive the garden in 2019-2020. The Big Bottom Valley, named for the “big” flat valley floor that is at the base of Mount Adams, Mount Rainier, and Mount St. Helens. The area was named for James L. Randle, the first justice of the peace in the area in 1886. Another famous heritage was Matriarch Mary Kiona of the Upper Cowlitz Native American Tribe, who lived her entire life in the Randle area until her death in 1970 at an age reported to be 115-121 years. She is famous for her basket-making craft using local plant resources.

The distinction as the Blue Star Memorial Highway was bestowed on this Illahee Roadside Park in 2007. The National program sets tribute to all men and women who serve in the US Armed Services and was started by the National Garden Clubs, inc in 1945 during World War II. A flagpole is was added to the park at that time. Illahee, meaning the Universe..the sun, moon and stars, the earth and every growing thing aptly applies to this group dedicated to preserving our native gardens.

Learn about the native plants of Western Washington while taking a short respite from your drive along the White Pass Scenic Byway. This well-preserved roadside park is a great place to stretch your legs or walk your pet (on a leash). Native plants are those that occur naturally in a region in which they evolved. They attract pollinating insects and birds while also providing shelter and food for large and small animals in the region. This park was lovingly restored by a group of dedicated enthusiasts from the Illahee Garden Club as part of a community project grant from the Plant America, a  project of the National Garden Club, Inc.

Restoring native plant habitat is vital to preserving biodiversity. Since they are in their native habitat, native plants have very low maintenance and unless drought conditions occur, they have little need for additional water. Follow the numbered posts to discover the 15 native plants along this self-guided trail.  Some of the names might be familiar, others not.  Pacific Dogwood flowers in the spring with showy white blooms, Blue Elderberry shows off beautiful clusters of berries in the fall, while Vine Maple is known for the autumn colors along much of the Byway. The little known Snowberry has white berries throughout the winter months. This is a year-round garden collection, so stop by during every season to learn what is happening in nature! 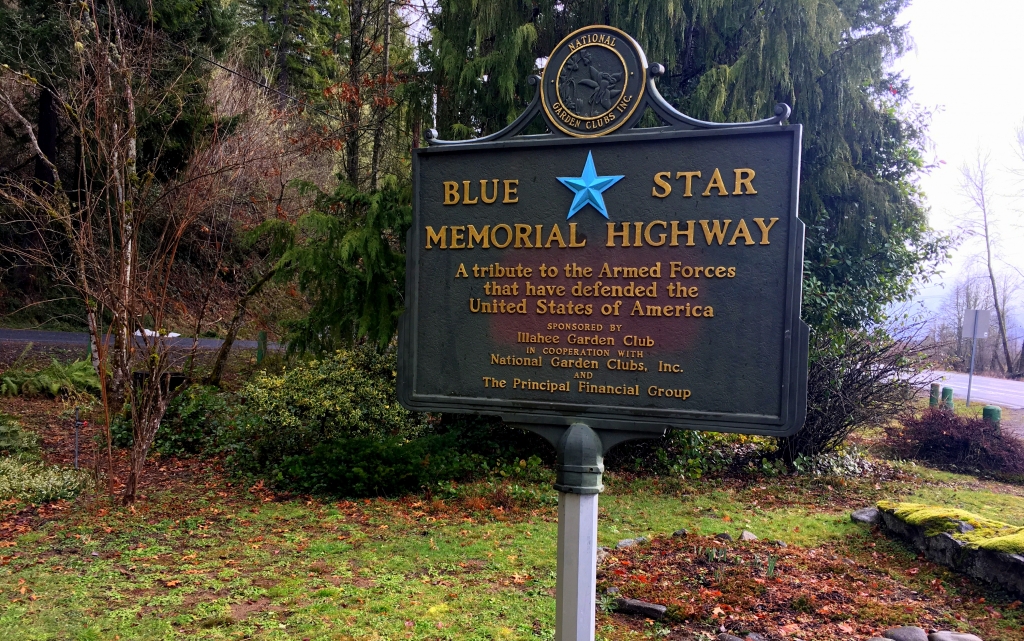