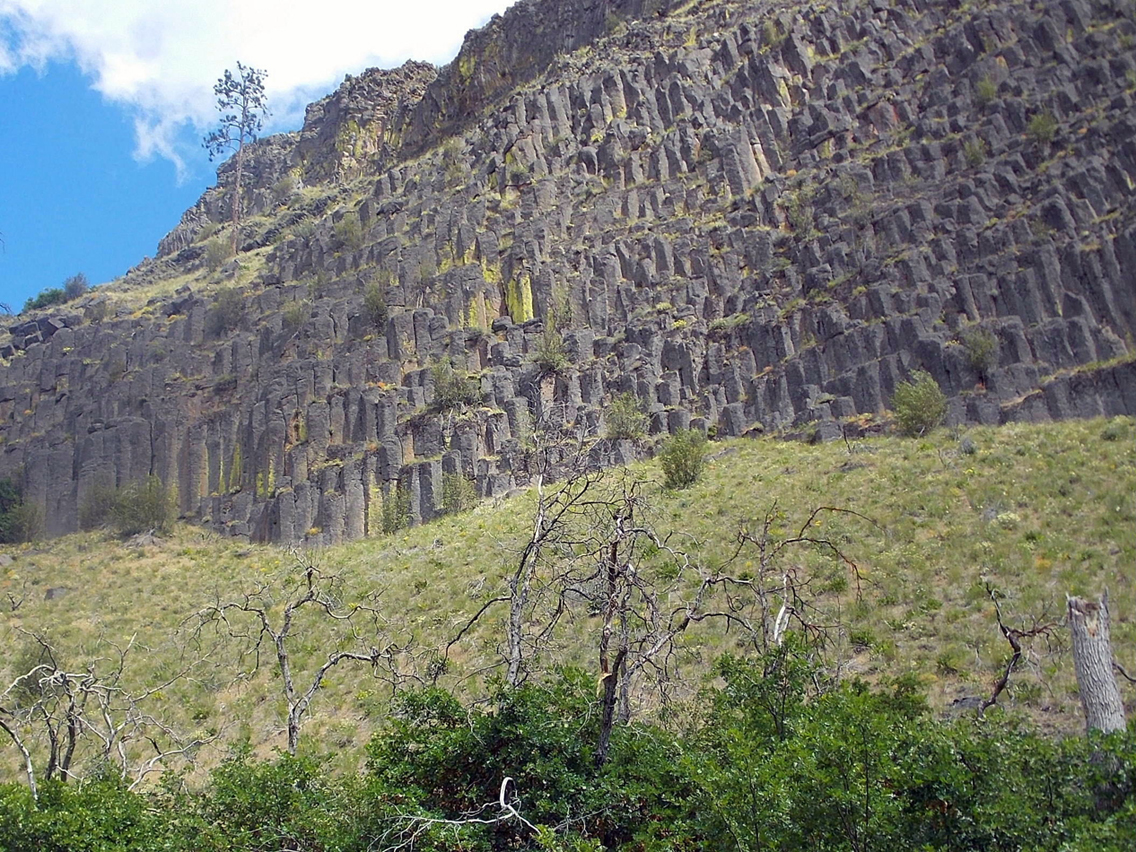 This short, scenic hike is an excellent complement to a visit in the Naches and White Pass areas along the byway. No matter where you start, the Tieton Nature Trail makes a sweet late spring/early summer hike with views of the Tieton River, wildflowers, columnar basalt, wildlife and solitude.

The trail is managed by the Washington Department of Fish and Wildlife in conjunction with The Nature Conservancy. The area is open to mountain bikers and popular with rock climbers though some climbing routes may be closed from February 1 through April 15 as the cliffs provide sanctuary for nesting Golden Eagles. If a nest is found near a crag, that route may be off-limits to climbers until later in the season. Climbers name the routes with such evocative names as Cactus Love and First Blood.

This lesser-known trail is seldom featured in hiking guidebooks though most refer to it as the Tieton Nature Trail and/or the Tieton River Nature Trail. Climbing guidebooks refer to the area as the Royal Columns. The trail appears on the Green Trails Map No. 305 (Tieton) but is not named. Though seldom in the media spotlight, word is getting around that this is a great place to explore.

The trail is across from the Oak Creek Wildlife Recreation Area. A Discover Pass is required to park there whether you are hiking, climbing or venturing onto the complex Green Dot Road System on foot or motorized vehicle. Green Dot Roads are managed by Washington Department of Natural Resources (DNR). There is a list of rules and regulations at the gate. The Green Dot Road is closed in winter so elk can feed without distraction.

After parking at the Wildlife Recreation Area cross US 12 and cross the Tieton River on a well-built footbridge, smell the Nootka roses and see if you can identify the colorful lomatiums that border the river (bring a wildflower field guide).

This is tick country in the spring and rattlesnake country in the summer. We did not find ticks nor did they find us. Rattlesnakes tend to mind their own business unless they are startled though Nature has designed them to blend in with the landscape making them hard to see so listen for warning rattles as well.

After crossing the river we came to a closed (not padlocked) gate that is open to users with a directional sign indicating the “climbers trail.”  From the gate we recommend hiking the path that parallels the river. Other paths lead to the Royal Columns and approaches used by rock climbers. We passed signs indicating some of the climbing routes on the cliffs were still closed for nesting eagles and falcons.

This was our first “hot” weather hike of the year so we hiked at a leisurely pace, not just to admire the scenery or identify wildflowers but because it was the kind of heat where you can break into a sweat standing perfectly still. Though the hike is easy, bring plenty of water and wear sunscreen and/or a hat.

Overall we found the trail to be gentle with no steep ups or downs. In about 1.5 miles we came to a metal suspension bridge that crossed the river. It looked stable but some hikers might find it intimidating as it is 10 feet above the river. You don’t need to cross the river unless you are making a loop where crossing the river is necessary.

The trail stays mostly in the open skirting still-green meadows; one graced with an enormous oak that we dubbed the “grandfather tree.” You can’t miss it. We checked out a couple of spurs that led to overhanging outcrops daubed with colorful lichen and chalk used by climbers for better grip on the rock.

The trail mostly rambles beside the river then rises gently before coming to the third bridge (sometimes called the “crooked bridge”). This bridge (without railings) is about three feet wide and about three feet above the river where two channels of the river split around an island. We’d hiked about three miles so made the bridge our lunch spot and turnaround. The trail continues another mile or so and ends at another road.

In the past, climbers rigged up a cable for a Tyrolean traverse across the river when a log they had used washed away or when river levels were low they’d ford (fording is not recommended in September).

We lazily retraced our route, surprised not to encounter anyone else on the trail. The light had changed so that the cliffs on the south side of the river were highlighted red and gold. The late-afternoon shadows between the tall andesite columns made deep and dark gashes between the crags and where sunlight touched the cliffs you could see patches of colorful lime-green lichen.

The sea of blue-flowered penstemon parted like a biblical sea as we hiked back through the tall grasses, yarrow and serviceberry, stopping for photography and to appreciate the quiet. Not even the whisper of a cricket broke the silence; only the ceaseless sigh of the river whispering secrets.

From Packwood continue east on US 12 (White Pass Scenic Byway) 20 miles to White Pass and continue another 36 miles and find the left turn into the Oak Creek Wildlife Recreation Area. Park in the large lot, Discover Pass required. Cross the road and start hiking.

The trail is also open to mountain biking. The map is Green Trails No. 305 (Tieton, WA). For additional information visit the Washington Department of Fish and Wildlife website at www.wdfw.wa.gov or the Nature Conservancy at www.nature.org (explore the website for other sites in the region).