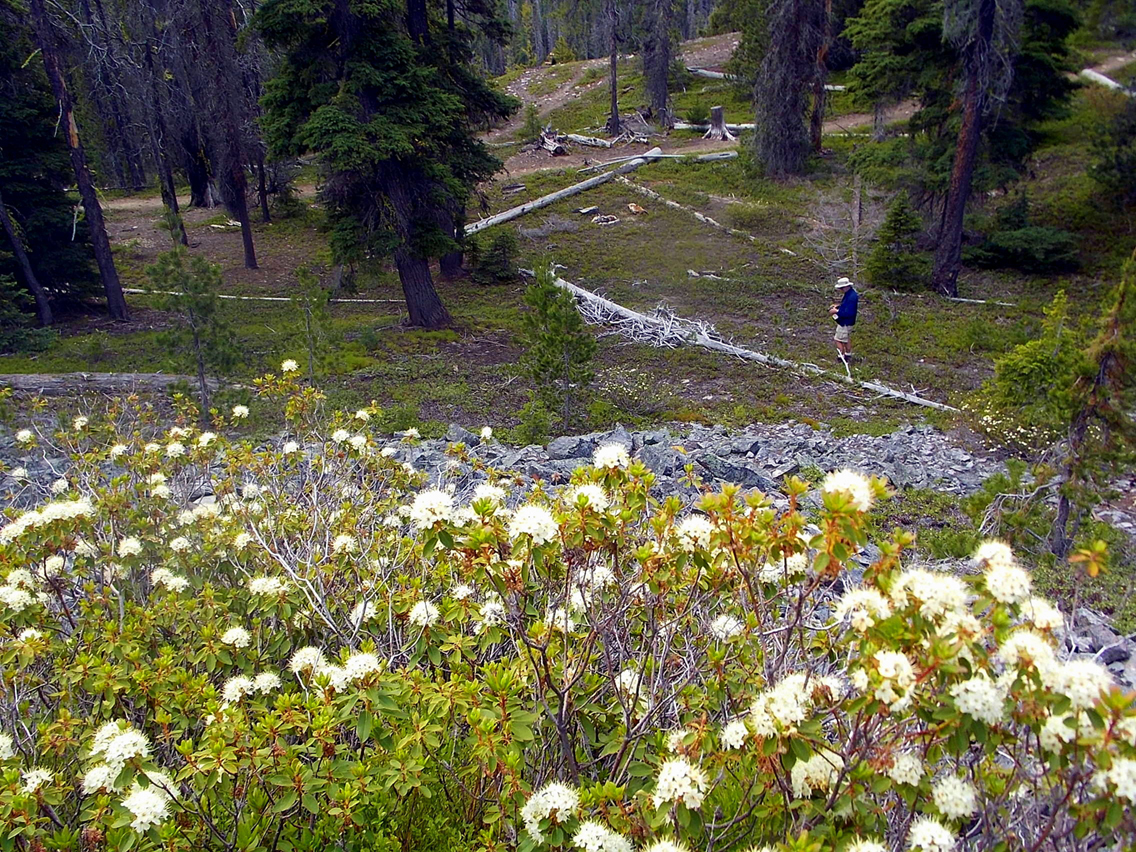 This trail is an inspiring introduction to the William O. Douglas Wilderness through a scented potpourri of Ponderosa pine, Douglas fir, alders, vine maple, flowering shrubs. The trail climbs easily to rocky outcroppings with views and many wildflowers including Indian Paintbrush, Oregon grape, Western Star, vanilla leaf, stream violets, coralroot and sand dock at higher elevations. The trail is in good condition and is also open to equestrians with connections to other trails including Shellrock Lake, Spiral Butte and the Pacific Crest Trail.

After hiking a few miles we knew why the trail was so lonesome in mid-June. Where snow had recently melted there was standing water on the trail. Hence, the mosquitoes had hatched and they were out in force. Fortunately we did not encounter them until we’d covered a few miles on the trail.

The first couple of miles are in the forest before the trail climbs to rocky outcroppings along Sand Ridge with splendid views and enough of a breeze to keep biting bugs at bay. This trail has an ancient feel to it, like it’s been there a long time. Maybe the late William O. Douglas for whom the wilderness was named hiked the trail or camped at one of the primitive campsites scattered along the trail. Every time we’ve hiked in the William O. Douglas Wilderness we’ve experienced silence, beauty and often, solitude. This trail was no exception.

The trailhead is just off US 12, east of White Pass, with room for about six vehicles and a facility. Before you hit the trail be sure to fill out a wilderness permit at the self-registration box to enter the wilderness. After a short, steep climb the trail mellows to long, lazy switchbacks through a mostly forested setting. In about ¾ miles there’s an unsigned but hard-to-miss junction for connector Trail No. 1147 (right) which connects to the Indian Creek Trail (No. 1105) and eventually a waterfall. We continued straight on the Sand Ridge Trail though hikers who have the time, mettle and the map can make a longer loop via Indian Creek if they so choose.

As we hiked we noticed many different shades of green along the trail including the baby-green of vine-maple and also noticed that some stretches of the trail still retained ash from the Saint Helens eruption in 1980.

At about three miles the trail breaks out into the open (4,490 feet) and though clouds hugged the distant foothills we did get a peek of Bear Creek Mountain. Equally interesting was the ridgeline where the trail skirts stacks of loose rocks that rattle when you step on them; it was like walking on broken crockery. Ponderosa pines anchor the ridge in place and from the overlooks there are hints of a green, semi-hidden valley below the rocks.

Clumps of lime-green lichen clung to the occasional weathered, white snag and snowbrush sprang from crevices in the rocks that comprised the boulder fields. We also passed several pleasant primitive campsites before coming to a junction for the Shellrock Lake Trail; Shellrock Lake would have to wait for another day.

We’d hoped to make a loop via Indian Creek but changed our mind as we began to hit snow patches and water where snow had recently melted. The trail skirted several pot-holes that were seething with mosquitoes. Even after applying bug juice they followed us and given we didn’t know the condition of the Indian Creek trail we turned around. Given those conditions in mid-June we recommend you might want to save this trail until later in summer or early fall after the snow has melted and bugs are gone.

After hopping back and forth across the trail to avoid the standing water we called it quits and retraced our route back to the first promontory with views and a breeze that kept the bugs away. The outcropping made a scenic lunch spot and also allowed us to explore a bit off-trail. We checked out a faint path that dropped below the promontory to an old camp and a few rusted cans used for target practice.

All too soon we were back at the trailhead a little disappointed we hadn’t been able to hike further. There were still no other cars at the trailhead or hikers on the trail. A word to the wise, wait a while for this hike or prepare to battle the bugs.

From Packwood drive east on US 12 (White Pass Scenic Byway) to White Pass Ski Area. Continue east on US 12 6.4 miles to the well-signed Sand Ridge Trailhead (left) with parking for six vehicles and an outhouse. A Northwest Forest Pass is required – don’t forget to fill out a permit to enter the William O. Douglas Wilderness available at the trailhead. And don’t forget the bug juice!

The map is Green Trails No. 303 White Pass. For additional information call the Okanogan-Wenatchee National Forest (Naches Ranger District) at 509-653-1401.