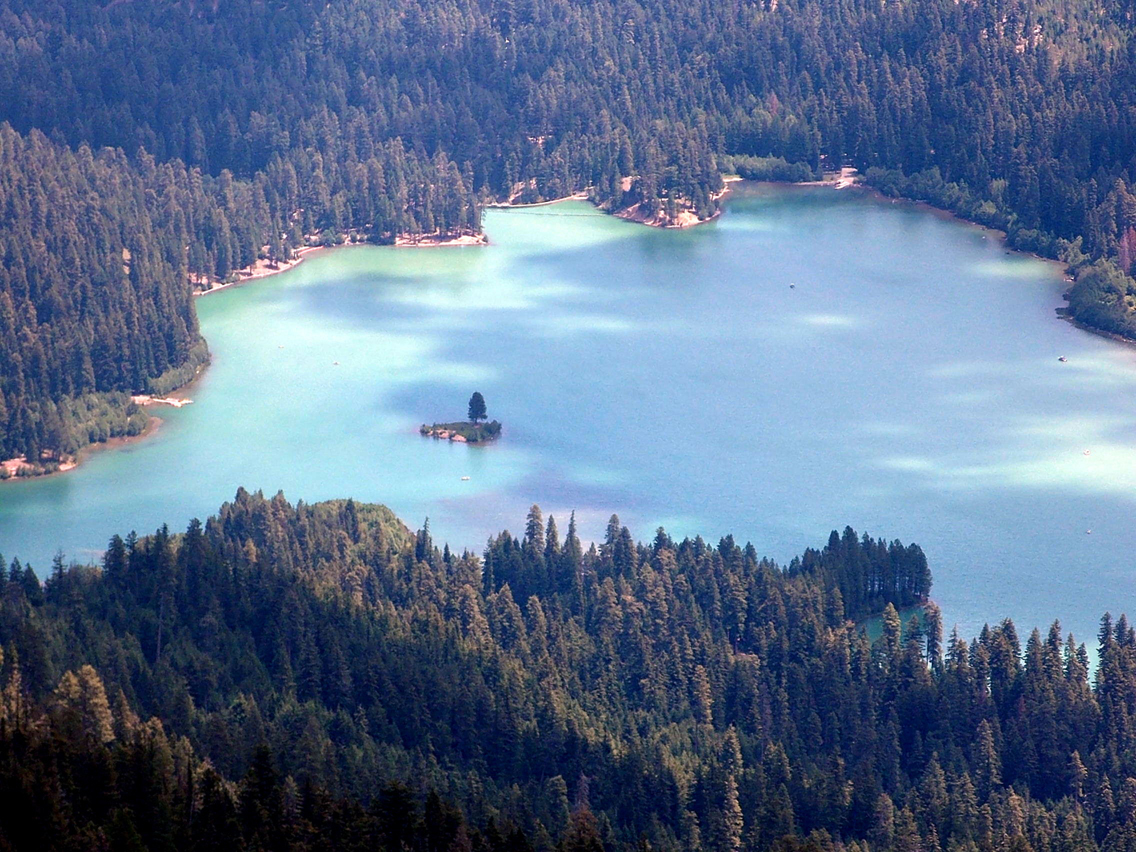 After our reconnoiter of trails and points of interest between White Pass and Naches via the White Pass Historical Byway in early June we returned to the region for a hike to the Round Mountain Lookout (Trail No. 1144). In early June we’d only had time to hike the first mile of the trail and we’d met hikers who said the upper part of the trail was still snow-bound.

Three weeks later we returned in hopes of getting to the lookout. There were only a few other cars at the trailhead on this hot, sunny day. We displayed our Northwest Forest Pass, filled out a permit to enter the William O. Douglas Wilderness and started up the trail.

On this hike it was a hot day with high humidity and we welcomed the cool breeze that wafted through the forest. We carried plenty of water (there is no water along the trail) and hiked at a leisurely pace, resting frequently.

The trail is a bit of a trickster; there are views of Clear Lake and Rimrock Lake from the forest service road to the trailhead so we’d anticipated more views on our way to the lookout. Several times we were deceived by what promised to be an open area just a few feet ahead but our only views until we reached the lookout site was a sliver of Clear Lake through the trees. This only whetted our appetite for those views!

In about two miles we paused at a split in the trail where the Round Mountain trail continues to Twin Peaks (right); the trail to the lookout goes straight. We opted for the lookout; if there’s one thing we know about lookout sites is that there are almost always good views. The 360-degrees were necessary when lookouts were the main method of sighting forest fires before other methods of fire-watching came into use. Then fire lookouts monitored the skies watching for a wisp of smoke from a forested ridge that signaled a forest fire; they were able to communicate their findings via telephone lines (hence, you may find parts of ceramic insulators and wires at lookout sites).

Most lookouts are gone today; only a few remain and a few have been rebuilt such as the Kelly Butte Lookout near Greenwater. Most lookout sites today are bare save for bits of twisted wire or concrete foundations where the structure once stood. The Round Mountain lookout was built in 1935 and destroyed in 1976 but until the trees grow back, the views of Mount Rainier, the Goat Rocks and Mount Adams will still be there.

Though the alders and vine maple were sprouting new, green leaves, flowers were few and far between until we reached the lookout site (there we spotted Indian paintbrush and penstemon). Soon the footings of the lookout appeared indicating where the lookout had stood. This is where the views begin: from the lookout site look straight down into Clear Lake and in the distance, Rimrock Lake and on a clear day, Kloochman Rock above Rimrock Lake. Here we found flat rocks to sit upon and enough shade to escape the hot sun beneath a few evergreens near the lookout site.

After a lazy lunch we poked around to see what else we could find and spotted a benchmark on the summit that dated back to 1938. A little toward the southwest we followed a path along the ridge to more outcroppings with views including the aftermath of a forest fire which can’t be seen the lookout site. Here we enjoyed sweeping views of Mount Rainier, Mount Adams and the Goat Rocks though our gaze kept returning to the site of the fire.

Be sure to heed fire precautions and campfire restrictions; a forest fire can grow from a few acres to 50-plus acres in a few hours.

Drive east on US Highway 12 and about 12-3/4 miles from White Pass to Forest Road 1200 entry to the Clear Lake Recreation Area. Turn right. Continue three miles to Forest Service Road 1200-530 and turn right. Continue another four miles to the trailhead at the end of the road and parking area. No facilities, a Northwest Forest Pass is required.

Note: the Round Mountain trail to the lookout has been rerouted since the Green Trails map so there will be a slight discrepancy of mileage between the map and trail.