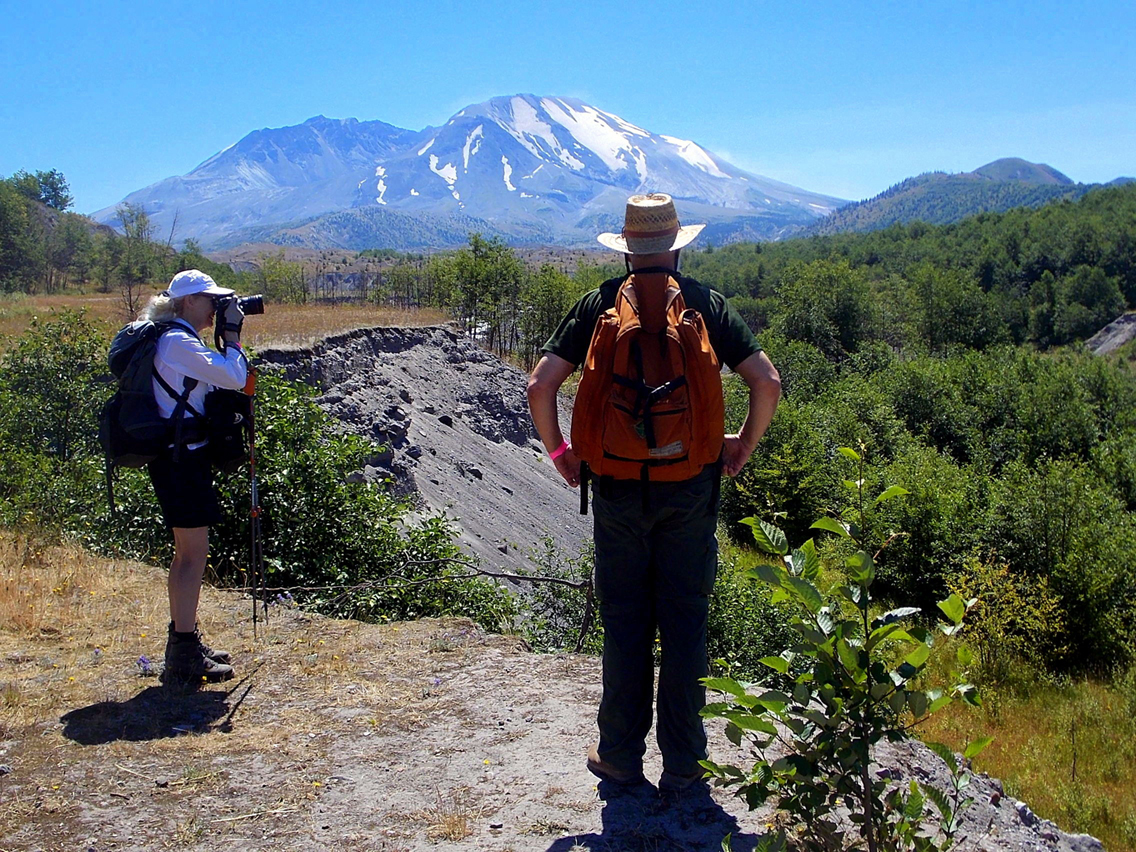 The Hummocks Trail at Mount St Helens is an experience visitors to the Mount Saint Helens National Volcanic Monument won’t want to miss. It is one of several trails on the north side of Mount St. Helens outside Castle Rock in what some call “Bigfoot Country.” The trail loops around hummocks and ponds created by the eruption of Mount St. Helens on May 18, 1980. Here hummocks border the sprawling Toutle River, a roaring giant in 1980 that took out bridges and buried homes. Today the river is slow, steady and it’s hard to wrap your mind around mudflows resulting from the eruption that surged all the way to Castle Rock.

After the eruption it was generally believed the blast zone would take a long time to recover; however life is full of surprises. Mammals, birds, insects, trees, shrubs and wildflowers returned to the blast zone within a matter of days and weeks; some plants and trees survived the blast protected by a layer of ash. You just can’t keep Mother Nature down. She’ll roar when mountains blow but she’s generous with her gifts. Life goes on even when we think it doesn’t.

Hiking counterclockwise the trail gently descends into a forested area with small ponds bordered with cattails, reeds, foxgloves and fireweed. Near the algae-covered ponds dragonflies cavort in the breeze, moving too quickly to photograph. Their lives are short, hence they dance while they can. They flit about so swiftly it is hard to track their flight pattern though we could see sunlight sparkling on their translucent, bi-plane wings.

Now about those hummocks – what the heck are hummocks? Hummocks are rounded knolls, in this case formed by the summit blocks of Mount St. Helens that blew apart when the mountain erupted. The blocks were carried down the mountain in a violent swirl of mud, water, ice and rock. Interpretive signs at intervals along the trail explain the geologic process succinctly in more scientific terms though you don’t need to be an expert on volcanoes to get a feel for the immensity of this powerful event simply by looking around.  Signs also remind visitors to stay on established trails as the area is still undergoing study and research.

On the trail the seemingly lifeless elements of the blast zone and energetic vegetation overlap; evergreens have taken root on the very tops of hummocks. Alders, cattails and willows are crowding the shores of catch-basin ponds. Alders play an important role in restoring disturbed habitat; their roots enhance the fertility of the soil by converting nitrogen from the air in a form that other plants can use. The alders provide an all-you-can-eat buffet for an explosion of caterpillars that followed the eruption (caterpillars are native to Washington). The effects of the caterpillars are being studied at Mount St. Helens as it is believed they play a role in enriching the soil. When you look at the “big” picture every living entity appears to serve a purpose: cattails are essential to birds in any given area. Native Americans valued willows for their bark which enabled them to make rope and cords for baskets and nets.

Hummocks may look devoid of life though nothing could be further from the truth.

The layers of sediment form a topographical sandwich as the North Toutle River squeezes between the pinkish-gray hummocks, some topped with eager evergreens. The darker rocks and matter on the hummocks you see are from much earlier eruptions of the mountain. About half-way a designated spur descends to a closer view of the North Toutle River. The trail stops short of the river though there are closer views of the hummocks.

In late summer flowers were in bloom including Indian paintbrush, fireweed, pearly everlasting, ocean spray (a flowering shrub), lupine, daisies, foxgloves and weeds, including dandelions, the bane of gardeners. The word dandelion comes from the French and translates to “the tooth of the lion”; there are folk legends about dandelions including one that maintains that if you drink a cup of dandelion tea every morning and evening you’ll never get rheumatism (dandelions do provide Vitamin A and C). Children (and some adults!) find it hard to resist blowing on their seed-heads unknowingly enabling the seeds to easily disperse and take root. With its deep root dandelions are impervious to animals or fire.

Pearly everlasting deserves more than a passing nod of recognition; this is the same small, white/yellow flower that grows along roadsides where soil has been disturbed by Man or natural events. The flower lasts well into fall and is often used in dried-flower arrangements. The flower is a good colonizer and one of the first flowers to bloom at Mount St. Helens after the eruption. Native Americans tucked the flowers into clothing and cradles for its sweet scent.

Though we enjoyed the sun we couldn’t help but sense poignancy in the landscape; already the hint of fall is in the air, the green grasses already brushed with gold and most of the dandelions gone to seed. It is only by the shady ponds that summer seems to linger and is reluctant to go.

As we stopped to gaze at Mount St. Helens at the end of our hike a small, swirling dervish of steam formed on the mountain then dissipated again reminding us that though the mountain sleeps, her dreams are restless.

To get a different feel for the effects of the eruption stop by the hard-to-miss Mt. St. Helens T-Shirt and Souvenir Center on your way to the trailhead along SR 504 (right). Just look for the big statue of Bigfoot (right). In additional to T-shirts are glass paperweights, mugs and earrings made from volcanic ash. Next to the store you’ll also see a semi-buried A-frame – what happened here? The mudflow from the eruption reached the second story of the house. Apparently it had just been sold and the new owners about to move in when the volcano erupted. The house was – and is – uninhabitable.

Inside we purchased books about Mount St. Helens, including some that are out of print and not available at the visitor centers. The friendly proprietor of the shop provided a cooler of ice-cold water on our visit, one bottle for each visitor that stops by on a hot day. Considering the historical interest of the items inside the store we found them reasonably priced, many a bargain.

From Seattle (or Portland) get off I-5 at Exit No. 49 to State Route 504, continue 45 miles to the designated trailhead (right side of highway). With two trailheads a few feet apart you can hike the loop in your direction of choice.